In the October 2014 Tip of the Month (TOTM), we demonstrated that Gas-Oil-Ratio (GOR) has a large impact on the capacity of crude oil gathering lines. In general as GOR increased the pressure drop increased which lowered the line capacity. In addition, at high pressures and low GOR, pressure drop was lower than the pressure drop for dead oil (solution gas is zero) because the viscosity of live oil is lower than viscosity of dead oil. This effect was bigger for the smaller line diameter.

In this TOTM, we will study the impact of solution gas (RS) on the crude oil properties in the gathering systems for one of the cases presented in the October 2014 TOTM. Specifically, the variation of the crude oil relative density and viscosity with the solution gas (RS) will be studied. Finally, the impact of solution gas (RS) on the oil and gas velocity and pressure drop along a gathering line for nominal pressure of 6900 kPag (1000 psig) and nominal pipe size of 101.6 mm (4 inches) will be demonstrated using multiphase rigorous method from a commercial simulator. The calculated properties, oil and gas velocities and pressure drops are presented in graphical format as a function of the oil stock tank volume flow rate and solution gas, RS. 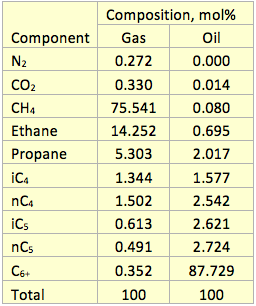 The following assumptions were made: 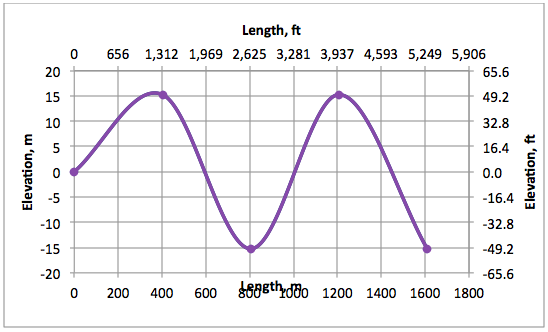 The two phase (oil and gas) flow through the gathering line was simulated by ProMax with SRK EOS for vapor-liquid equilibria and Beggs-Brill for two phase pressure drop calculations. Figures 2A and 2B present the calculated pressure drop per unit length as a function of oil stock tank volume rate and GOR for nominal line diameter of 101.6 mm (4 inches) at nominal line pressure of 6900 kPag (1000 psig) in SI (international) and FPS (Engineering) system of units, respectively. Figures 2A and 2B indicate that as the GOR increases from 0 to 35.7 Sm3/STm3 (0 to 200 scf/STB), the pressure drop decreases but increases with further increase in GOR of 89 Sm3/STm3 (500 scf/STB) and higher.

The impact of RS on the properties of oil is demonstrated in the next section which will explain the causes of pressure drop. 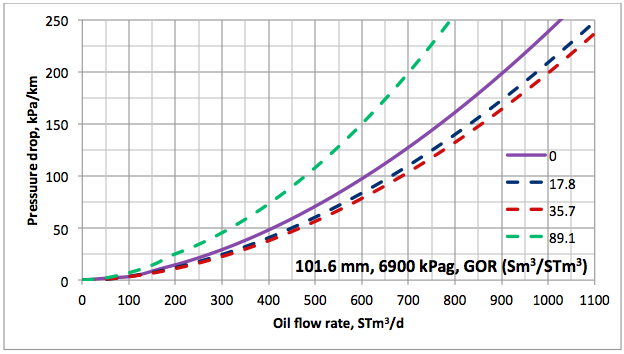 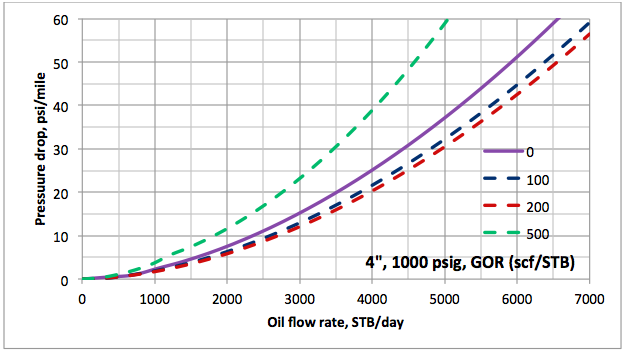 Figure 2B (FPS). Variation of pressure drop per unit length with oil stock tank volume rate and GOR at 1000 psig for 4 in pipe diameter

Figure 3 presents the bubble point pressure of the feed to the gathering line at 15.6 (60) as a function of solution gas. Figure 3 indicates that for the nominal line pressure of 6900 kPa (1000 psig), the feed is under saturated up to GOR of 51.8 Sm3/STm3 (290.5 scf/STB). For GOR greater than this value, the oil becomes saturated with gas and gas breaks out. 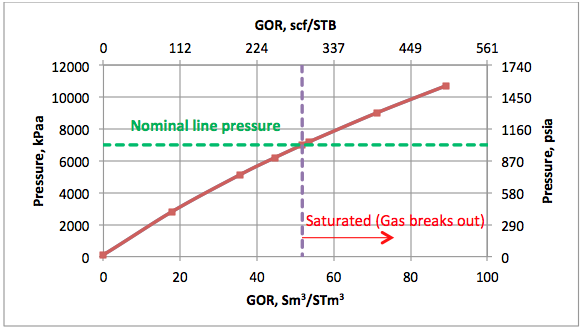 Figure 3. Bubble point pressure of the feed to the gathering line as a function of solution gas at 15.6 (60)

The variation of oil relative density along the line as a function of solution gas (RS), is presented in Figure 4. This figure indicates that as the RS increases, the oil relative density decreases. Figure 5 shows that as the RS increases, the oil viscosity decreases considerably. The reduction of viscosity causes pressure drop to decrease. The simulation results (Figure 3) indicated that for GOR less than 51.8 Sm3/STm3 (290.5 scf/STB), the flow is under saturated single liquid phase; however, for higher GOR the flow becomes saturated two phase (gas and liquid) which causes the pressure drop to increase. The increase in pressure drop due to higher GOR (and higher total flow rate) is more than the decrease in pressure drop due to reduction of oil viscosity as a result of solution gas. The net effect is higher pressure drop compared to dead oil (GOR = 0) pressure drop.

Figure 6 presents the variation of oil and gas velocity for two stock tank oil rate along the gathering line at 6900 kPag for 101.6 mm pipe diameter and GOR of 89.1 Sm3/STm3 (500 scf/STB). Figure 6 indicates that the oil velocity remains constant along the line but the gas velocity increases due to pressure drop in the line. 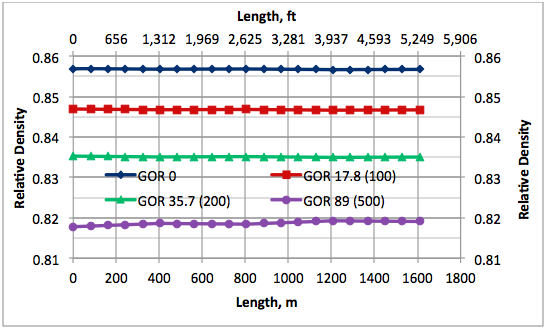 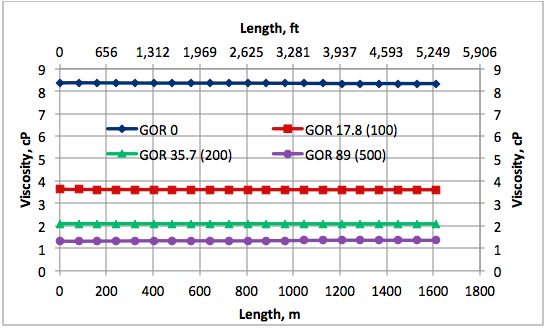 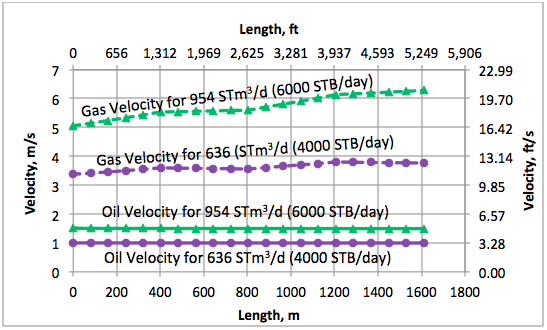 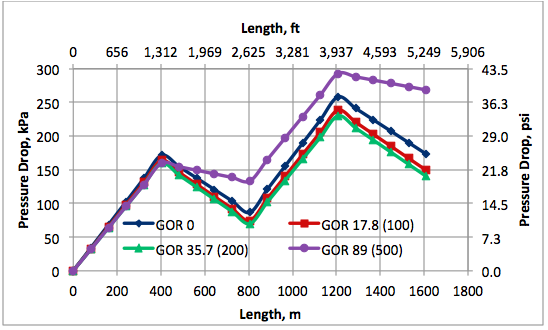