In the March 2009 Tip of the Month (TOTM), procedures for calculation of friction losses in oil and gas pipelines were presented. The sensitivity of friction pressure drop with the wall roughness factor was also demonstrated. In the August 2009 TOTM, we also demonstrated the effect crude oil °API and the pipeline average temperature on the pumping requirement.

In practical situations, an originating station takes crude out of storage and the midline stations taking suction from the upstream section of pipeline. Oil in the tank is often at ambient temperature, whereas once in the pipeline, the oil cools (or warms) to the same temperature as the ground. In some parts of the world, the tank might be at +38 °C (+100 °F). The first midline pumping station could operate at 18 °C (65 °F), and all subsequent pumping stations might operate at ground temperature, or notionally 9 °C (48 °F) with some seasonal variation. Therefore, a sound pipeline design should consider expected variation in crude oil viscosity which is normally a function of crude oil °API, and the line average temperature. In addition to °API and temperature, chemical additives may also affect crude oil pipeline pressure drop.

To reduce pressure drop and increase pipeline capacity, oil industry has utilized drag reducing agents. Drag-reducing agents, or drag-reducing polymers, are additives in pipelines that reduce turbulence in a pipe. Usually used in petroleum pipelines, they increase the pipeline capacity by reducing turbulence and therefore allowing the oil to flow more efficiently [1]. In addition to drag reducing agents, another group of chemicals called “Incorporative Additives,” which reduces crude oil viscosity, may be used. Halloran presented a series of general reading articles on chemical additives [2-4].

In this TOTM, we will demonstrate the effect of an incorporative additive on crude oil viscosity and consequently on pressure drop for crude oil pipeline transportation.

Table 1. Measured kinematic viscosity [6] and absolute viscosity for several crude oil samples at 50 °C (122 °F) without and with chemical additive. 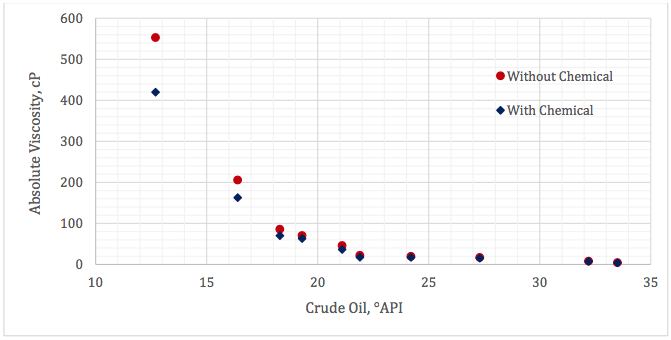 The absolute viscosities and the fitted correlations are shown in Figures 2 and 3 for crude oil samples “without” and “with” chemical additive, respectively.

It is also assumed the line temperature is constant at 50 °C (122 °F). The change in pressure drop (ΔP) due to changes in crude oil viscosity for this case study will be calculated and presented in the following sections.

Tables 2a and 2b show the calculated pressure drop for four different crude oils with varying viscosities in System International (SI) and field units (FPS – Foot, Pound and Second), respectively. The measured absolute viscosities were used to calculate pressure drops for all cases. The oil flow rate is 7,950 m3/d (50,000 bbl/day). Table 2 indicates that by using incorporative additives a reduction of up to 24% in pressure drop is achieved for this case study. The results in this table also indicate that the percent reduction in pressure drop (0.5% for the lightest oil) is not as high as the percent reduction in viscosity (3.7% for the lightest oil). Another observation is that the reduction in viscosity and consequently in pressure drop for light crudes oils is not as significant as for the heavy crudes.

Table 2a. Pipeline pressure drop for four different crude oils without and with additive at 50 °C and oil flow rate of 7,950 m3/d

Table 2b. Pipeline pressure drop for four different crude oils without and with additive at 122 °F and oil flow rate of 50,000 bbl/day

Table 2c. Reynolds number and friction factor for the cases in Table 2 a and b

Similarly, for an oil flow rate of 15,900 m3/d (100,000 bbl/day), Tables 3a and 3b show the calculated pressure drop for the same four crude oils with varying viscosities. Tables 3a and 3b indicate that as flow rates are increased, less reduction in pressure drop is obtainable if the flow becomes turbulent. For the case of 16.4 °API, the reduction in pressure drop is 6.6% compared to 20.7 reduction when the flow rate was of 7,950 m3/d (50,000 bbl/day). The calculated Reynolds number, Moody friction factors for the cases of lower and higher oil flow rates are shown in Tables 2c and 3c, respectively.

Table 3a. Pipeline pressure drop for four different crude oils without and with additive at 50 °C and oil flow rate of 15,900 m3/d

Table 3b. Pipeline pressure drop for four different crude oils without and with additives at 122 °F and oil flow rate of 100,000 bbl/day

Table 3c. Reynolds number and friction factor for the cases in Table 3 a and b

A total cost analysis based on hydraulic design and chemical additives with consideration for HSE (health, safety, and environment) should be made for effective design and operation.

PetroSkills offers consulting expertise on this subject and many others. For more information about these services, visit our website at http://petroskills.com/consulting, or email us at consulting@PetroSkills.com.